Heston students have had their poems published in The Poetry Games. 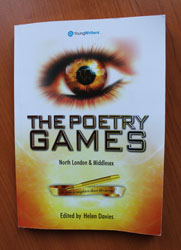 Following a competition throughout London, thirteen Heston students’ work was selected to appear in The Poetry Games.

The competition asked young writers from across the country to “stand up for what they believe in using nothing but the power of the pen.”

The competition judges said of Heston students’ poems: “Whilst skillfully conveying their opinions through poetry, the writers have simultaneously managed to give poetry a breath of fresh air, brought it to life and made it relevant to them.”


Mr O’Keefe, an English teacher at Heston who organises creative writing clubs, said:
“I’m delighted that so many Heston students are featured in this collection … but not surprised as these young writers have produced some outstanding and thought provoking work throughout the year.”