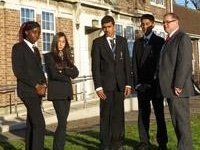 Heston Community School now has Academy status, marking a fundamental change in how the schools are run.

Heston Community School now has Academy status, marking a fundamental change in how the schools are run. This follows many months of delays because of a dispute with the Local Authority surrounding land issues which eventually had to be the resolved through the legal process including a ruling by the Schools’ Adjudicator.

From 1 November 2012 the School will no longer be maintained by the Local
Authority and will receive its funding instead directly from the Department for Education’s Funding Agency. The School will be run completely independently of the Council including employing all its own staff and managing its own finances.

Although the Academy will no longer be in Council control, it will remain firmly at the centre of its community and within the local family of schools and moving forward will maintain its strong links with the University of the Arts London.

Phil Ward, Headteacher (pictured left with students), said: "The School’s conversion signals the beginning of a new era. Now that we are an Academy, the School will have a greater degree of control over the way that it is managed and developed in order to maximise learning opportunities for its students. We are looking forward to continuing to work with local schools for the benefit of the students."