A cheque for £3,828.95 was presented to Shooting Star CHASE by Year 9 students 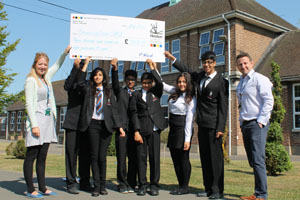 A new record for fundraising has been set with Year 9 raising £3,828.95 this year. This impressive amount was raised through a variety of activities with the major one being a “half marathon” sponsored walk.

The money raised was given to Shooting Star CHASE, a charity caring for local families with a child or teenager with a life-limiting condition. The charity currently helps over 600 families living in western London, Surrey and West Sussex.

Lauren Ellis from Shooting Star CHASE pictured above with the students, attended a Year 9 Assembly at Heston and was presented with a giant cheque by the students. Lauren said: “It is so inspiring to see Heston Community School students raising money for children and teenagers with life-limited conditions. They have done a fantastic job raising just under £4,000 which will go directly towards the families that Shooting Star CHASE supports – a big well done to Heston students!”