Heston Henge is the Winner! 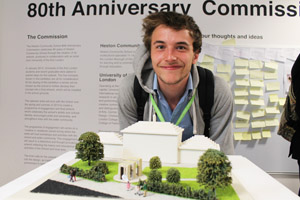 Heston Henge will be created to celebrate the School’s 80th Anniversary. It is the winning sculpture design from Charlie Humble-Thomas, a University of the Arts London student (pictured left). The decision of the judging panel reflected voting on the shortlisted designs. It was by far the favourite of the whole school vote and even after some tough competition from very compelling presentations by the other bidding artists; it also got the judging panel's vote by a large majority.

The sculpture will be prominent at the front of the School as a great symbol of the Visual Arts specialism and most importantly will reflect the artwork and history of students at Heston, all of whom will make their mark on the final design.

The sculpture will be made up of three free standing limestone arches with oak panels, created from students’ work, depicting key dates in Heston’s development. A model of the sculpture is pictured above with Charlie and some of his initial concepts (pictured right) illustrate how the oak panels would be viewed inside the arches.


Sixth Form and Year 7, 8 and 9 students were highly praised for their insightful response and judgement in the final decision making process.

Charlie will be visiting Heston shortly to start the process and get to know our students who will be closely involved in the sculpture throughout the coming year.