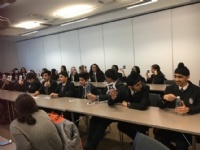 Students participated in a Modern Foreign Languages workshop where they were given the opportunity to ask various questions to the student ambassadors about the courses, academic requirements, accommodation, student life,  student finance and career opportunities after university.

Students were also given a tour of the university and they were highly impressed by the stunning Founder’s Building. Students had the opportunity to look around various departments including the Modern Foreign Languages department, halls of residence, leisure facilities, the food hub and libraries. 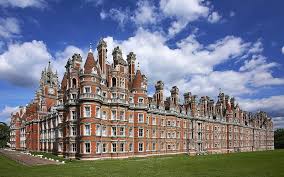 The Modern Foreign languages workshop was interesting, where the students carried out some engaging activities such as a quiz on university life.  The Spanish lecturer summed up the importance of studying a Modern Foreign Language by claiming:

‘Anyone with a foreign language under their belt will have an immediate advantage in the job market because they can deliver their company an edge in the world market’.

Students found the trip very beneficial, as for some of them it was their first visit to a university. Some students have been inspired and motivated by this visit and are now starting to think more about the prospect of going to university to pursue their studies.

“I enjoyed my visit to Royal Holloway University because I found out about the different courses offered at this university and the entry requirements. I was particularly fascinated by the history of this university, which was founded by Thomas Holloway, opened by Queen Victoria in 1886 and was among the very first institutions in the UK to give women access to higher education.” - Sukhnam Kaur 10 Orange

“My favourite part of the day was having a tour around the campus. This is because I learnt a lot on how students live and study at the university. I learned the similarities as well as differences between schools and universities. This was helpful as their great advice will guide us in the future when making significant decisions.” – Zahraa Bhatti 10 Blue