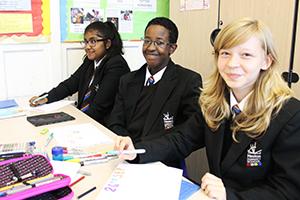 The challenge was to create a poster highlighting European Languages and some outstanding posters were produced which made the judges task of selecting the winners very difficult.

Mrs Virk, Curriculum Leader for MFL, and her team were the judges with this difficult task – she said: “We were very impressed with the students’ creativity as well as their research into the wide range of European Languages … the winners (pictured above) certainly deserved their prizes!”

Deputy Headteacher, Mr O’Hagan, who congratulated the winners was also “impressed with the quality and importance the young people placed on their language learning.”