Heston’s new Year 7 students had a busy first day at “big school” which ended with a team exercise to design a flag for their tutor group.

Our new students arrived at 8:30am, looking very smart in their new uniforms, for their first Assembly in the School Hall. Mr Ranjit Berdesha, Acting Headteacher, Ms Margot Currie, Assistant Headteacher and Mr Matt Williams, Learning Coordinator for Year 7, welcomed them and explained what life at Heston would be like and some of the expectations we have for our students … as well as some of the rules! 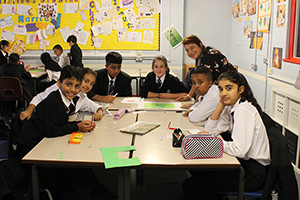 Mr Williams said: “Get to know each other better … look out for each other and try to improve every single day”

Mr Berdesha told them to expect a much busier school tomorrow but that “you are just as important an individual as anyone here” and “we want the next 5 or 7 years to be the best years of your lives.” 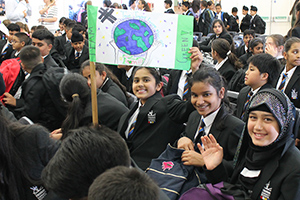 There were also brief talks from two of last year’s Sixth Form students Kumail and Adam who are off to study at UCL and Imperial College after gaining 7 A* A level grades between them – they talked about having fun and working hard and explained there were nervous about starting at university and it was “good to be nervous as it shows you want to do well!”


After lunch, when students used the school's biometric scanning to pay using their finger print, and at break the astro pitches were well used. Students also lined up on the pitches for their first fire drill!

The students also had sessions in their tutor groups where they were introduced to our Growth Mindset principles and were also set a team task to create a flag to represent their group. Some impressive flags were then presented to the whole year group at the end of an exciting and busy day.