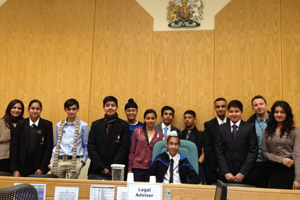 Heston students took part in the Mock Magistrate Competition at Hammersmith Magistrate Court. The competition enabled them to get a better understanding of just what goes on in the court as well as take part in mock cases against other schools.

A team of twelve Year 8 and 9 students, successfully defended their case against Harefield Academy, but could not generate enough evidence to prosecute against Gunnersbury School, who were the eventual winners of the heat.

There were excellent performances by Zeeshan Hussain as our usher ("COURT RISE!"), Yash Pandey and Nithyam Patel as our defence lawyers and Amar Nagi, Nader Chaudhry and Riaj Rahman as witnesses.