Congratulations to 7P - this year's winners

The Science Department very proudly hosted Heston Community School’s best ever Science Fair on Wednesday 13th July and what a fantastic occasion it proved to be. Year 7 classes were given approximately 2 weeks’ lesson time plus homework to make an innovative display project investigating a curious scientific question they have always been intrigued by. 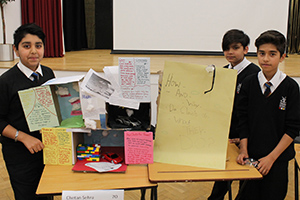 In teams of three, Year 7 students were totally absorbed in this independent thinking and learning task and Ms. Slater was very impressed with the diligence and dedication demonstrated by her year group. The groups also excelled in showing commendable commitment to team work skills, sharing good ideas and taking ownership of such an intensely creative task. They could be seen working away every day, assembling their projects and spending every break and lunchtime adding the final finishing touches. 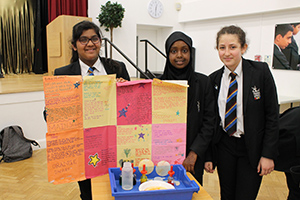 Class teachers had the difficult task of selecting the top two projects from each Year 7 class and what a difficult job that was with so many excellent projects on offer. The winners of each science class presented their projects to the Science Fair 2016 judges, Amrit and Karishma and Yash from the Sixth Form Senior Student team. Our enthusiastic Science Fair contestants found two minutes way too short in selling their projects to the judges. As you can imagine selecting the best project as a Science Fair 2016 winner was a very difficult job indeed. The judges were most definitely put under a lot of pressure to decide so quickly but such is the nature of the job.

After applying some intense decision making skills, the judges presented the best project award to “Congratulations to "Do mermaids exist?” by Roshni Barass, Atiyaah Ali and Puneet Bansal of 7P. This project displayed immaculate presentation skills along with so much scientific data presented in various graphical forms together with a conclusion that critically evaluated every piece of evidence. 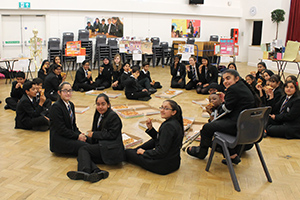 The winners and runners up were overjoyed to be presented with scientific encyclopedias, certificates and achievement points they were awarded with. The awards were then followed on by the most amazing treat; a pizza party! The winners watched in amazement as a huge number of pizzas were delivered to the hall, what a wonderful feast it was! The Science Department would like to thank all Year 7 students and their parents for their continued support and positive contribution to making science at Heston even bigger and better as each year.