Read Zubair's report on the visit 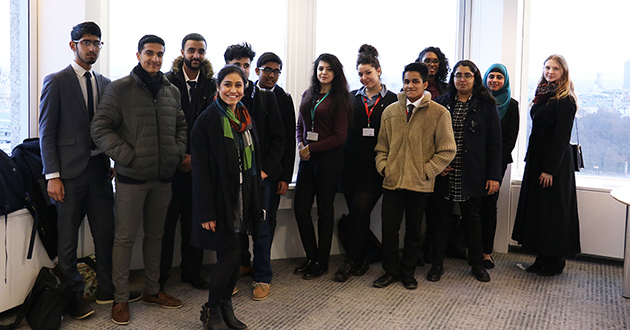 A report by Zubair Karmalkar - Year 12
On Thursday 21st January Heston Sixth Form students attended the launch of the Economist newspaper’s Policy  League programme which strives to increase the cultural capital of Sixth Form students in London. Four schools from across London, including Heston Community School, have been chosen to participate in the pilot scheme.

Students from Heston’s Sixth Form met several employees of the Economist who have founded the scheme, including the Chief Executive of the newspaper at a gathering at the Economist Plaza in Central London.

Sixth Form students Kiran Razzaq and Zubair Karmalkar represented the school at the Economist Tower, along with other students. Students from each school gave a speech about how they thought the pilot would help them academically and also with other skills.

English teacher Ms Kaur has collaborated with The Economist to allow students from Heston Community School to take part, she said: “This is a fantastic opportunity for our students to be ambassadors of Heston when competing with other schools while vastly developing their social and cultural capital”.

“The view from where the gathering was held was great. We could see out to the horizon, the skyline of the City and the East End. I met lots of people that were great fun to talk to.”  - Sixth Form student