Year 9 students' competition winning artwork will appear across the Borough. 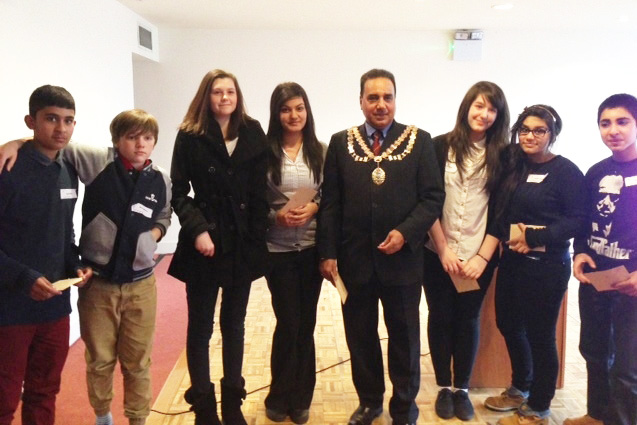 Year 9 students who attended a Youth Crime Convention emerged as winners of competitions held on the day and the artwork they created will be used to promote the ‘Hate Crime’ message throughout Hounslow. The students received their awards from the Mayor of Hounslow, Councillor Pritam Grewal.

Year 9 student Karishma Bagga, pictured above left of the Mayor with the winning Heston team, reports on this successful and enjoyable day:

"On Friday 8th February, I took part in the ‘Hounslow Borough Youth Crime Convention’ for Year 9s. 15 schools around Hounslow were taking part. We had been selected based on our hard work and this was our reward to represent our School. I was quite nervous at first about what to expect, but we had a great group of students on the trip. 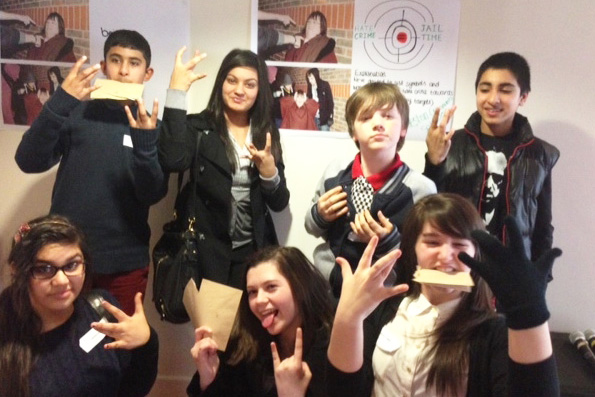 The trip was organised by the Learning Mentors, Sam and Mr Brown. During the course of the convention, we took part in various activities some being: Interactive drama play, Drama workshop, Stop and Search, Cyber bullying and Designing a logo based on ‘Hate Crime’ (pictured right, behind the group).

During the day, it was great to meet new people: students, police officers and youth workers who all helped us learn more about what ‘Hate Crime’ really is.

There were competitions during the day and Heston Community School were the overall winners! This was a phenomenal feeling knowing that we had achieved such success and that our work would now be displayed publically across the whole of Hounslow - our logo will be on buses and bus shelters soon!

Receiving our awards from the Mayor of Hounslow was the highlight of the day. We were so proud that Heston were the winners!"