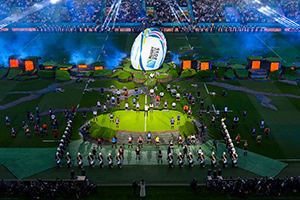 As some of you may know the Rugby World Cup (RWC) OpeningCeremony took place at Twickenham Stadium on the 18th of September 2015. Some students from our school had the opportunity to take part as performers (Ida, Amba and Wiktoria). The Opening Ceremony was performed at the stadium in front of 82,000 people in the stadium plus an estimated world wide audience of over 100 million watching at their homes. This was a once in a life time opportunity for us to represent the school in such a prestigious event.

Before the ceremony we had to attend rehearsals though-out the summer holidays. The rehearsals were designed to prepare us for the final performance in September. These rehearsals were fun and exciting but also hard work due to the high standards that were expected when we performed. One of the hardest parts of taking part in this event was keeping everything a secret, we were not allowed to give any information about what the ceremony will be like to friends and family members so the big day could remain a surprise. 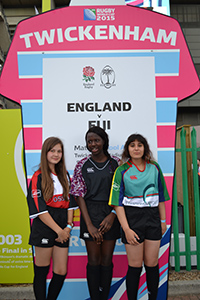 As we got closer to the final performance the number of practises increased. Dress rehearsals took place in the stadium. At theses rehearsals we had the chance to wear our costumes and practise the “choreography” for the day. During these rehearsals we got to see some of the past players from the different countries of the World Cup and we had front row seats to see the special effects being used (fireworks, fire, smoke).

On the day of the final performance there was a different atmosphere in the stadium. All the students taking part had mixed feelings of excitement and nerves. As we entered the stadium to go to our waiting area the crowds had already started to build up outside the stadium. In our waiting area we had a chance for one last rehearsal before it was our time to perform.

Then it was time for the real thing, the nerves started to build again. As we walked through the stadium, down the halls which were packed with spectators all in white supporting England. We then got to our final holding area in a small corner of the stadium. That’s when it sunk in what we were about the do - the nerves changed to excitement. We could see the excitement of the crowd building, we joined in singing songs with the crowd and then the Opening Ceremony went live. 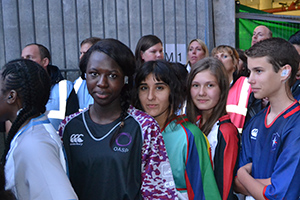 We ran onto the pitch and all the practise over the past few weeks came into action, we all knew exactly what we needed to do and where we needed to be. The atmosphere in the stadium was amazing, lights flashing, music blaring from the speakers, smoke and fireworks. We were in the centre of the stage and on the platforms that raised either side of the ball in the centre. Before I knew it, our part was over, I was running off the field where we were all celebrating, shouting, cheering and giving high fives to each other.

It was such a magical moment being out there and we still can’t believe that this ever happened - this is something I will always remember!

Many thanks to Mr Howkins, for organising this event for us!