Read Navpreet's report on a "trip to remember"

Early in June thirty Year 10 students embarked on a practise 24 km expedition, required for the Bronze Duke of Edinburgh award. Here is Navpreet Dhaliwall's report on what happened:

The morning of the expedition

By 7:00am, all participants of the award scheme arrived at the school gates; carrying enormous back-breaking backpacks.

After a few seating and bag arrangement dilemmas later, everyone managed to cram into the minibuses and set off to Box Hill.

One restless journey later - in which some fell asleep and some watched “try not to laugh” videos for entertainment - we arrived at Box Hill. Distant hills and lush forests greeted us whilst the rocky roads and bumps reminded us that we would soon endure the trek upon them.

It was here where Miss Stone brought her 3 adorable dogs, to which everyone awed; whilst a few others and I chose to love them from a distance!

After a brief discussion of our routes, the etiquette for carrying our bags and a few toilet trips, we were all set to part our ways on our separate routes.

Each group would have a teacher assigned to walk with them until the group were confident to carry on.

My group consisted of Yash, Usmaan, Hadyn, Janeesh, Harveet, Mansi and I; accompanied by Mr Brit. 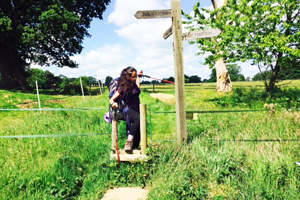 As our group grew confident with navigation, Mr Brit decided to leave us to it and literally ran in the opposite direction; nothing personal, we hoped!

As we ventured on our own, we began to lose ourselves in the labyrinth that was the forest. In the meantime, however, we relaxed with a quick lunch break; at which Hadyn used chop sticks and wondered why we all mocked him.

This mockery was short lived as Mansi then laughed at him and proceeded to tumble over a rucksack (what goes around, comes around.)

Things also took a terrifying turn when we encountered a downward dark, steep and rocky wooded area; similar to that of the “Blair Witch Project” movie, we were all keen to get back to the campsite.

After around 7 hours of trekking, we decided to call for help. As we all lay restless and defeated - with the slight inhibition to kill each other - hope came in the form of Miss Stone; who then took us back to the campsite.

Upon arriving, we were greeted with hugs, comments of praise and slight mockery as we were the last group; stumbling in, we were thankful just to make it back.

After arguing with Hadyn about the correct method of cooking noodles, we all finally ate and joined everyone for roasted marshmallows; as well as a Haribos eating competition which involved catching one in your mouth (no one won, but it was humorous to watch people attempt to!)

At around 10 pm, we all decided to call it a night; with the glorious chorus of people shouting “Bogeys!” and people accidentally bashing into tents on their way to their own- despite having torches.

My alarm - which I had forgotten to turn off - woke me up; morning dew graced everyone’s tents and trekking shoes to make for a freezing, cold and dull morning.

Once everyone had eaten- and Manpreet almost created a flame throwing show, to which we would experience Mr Williams’ priceless terrified expression - we all set off on our final - thankfully shorter -treks.

After a quick sunbathing session in the fields and more trekking, we finally made it back to the campsite (not last, this time.)

Overall, I speak for everyone when I say that the expedition was indisputably the best trip anyone had been on. From the “naturesque” views (see below) to banter at the campsite, it was truly a trip to remember.