Rap History of the World

On Monday 15th December, Year 11’s PSHCE lesson took a twist from its usual hustle and bustle to something more unconventional. Spanish Teacher, Miss Dua had organised for a rather different PSHCE lesson, with an invitation to Philip Day who gave an interesting and insightful rap describing the evolution of mankind, sequencing all the major events in history since the Big Bang.

The rap was covered in three parts with teachers and students applauding Day’s memory skills and creative lyrics. Students learnt much … the rap that covered the Origins of Life on Earth, agriculture, the Ice Age, civilisations, trade, empires, wars, Industrial Revolution, the 20th Century and Modern Day society. 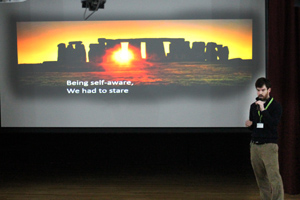 Comments made by students after the assembly:

The rap was one which was intriguing but wonderful as well with unexpected rhymes and surprising events thrown at the audience. Day then proceeded to take questions where he said, “in schools, they don’t teach you this... One day I was just wondering what had happened in the world, and I saw a rap on the TV and thought ‘I could do that’, and that’s how it came about.” With the assembly coming to an end, Year 11 gave a spectacular round of applause to Philip Day and gave Miss Dua, the organiser, a collective thank you.