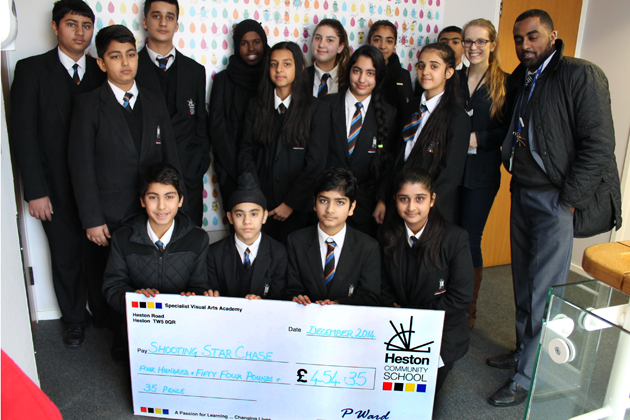 Year 8 students visited Shooting Star Chase to hand over money they had raised for the charity – this is their report:

During school, each form raised money by holding a fundraiser. Some classes held a bake sale and others made things like bracelets and sold them to students and teachers. We then all decided what charity we were going to give the money too. After a lot of thought we decided to choose Shooting Star Chase. We all ended up raising £454.35 by holding our fundraisers, which we enjoyed a lot. 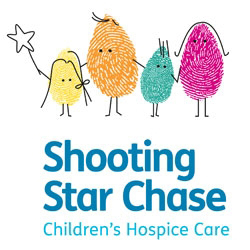 We then got in touch with the charity and we organised a meet up. They invited 14 children and 2 adults to come and give the money. As it was for charity, the 14 students chosen were all of the charity reps, these were: Jessica, Carolina, Zarain, Prableen, Nikil, Raja, Shraddah, Sagal, Ramneek, Kaweljeet, Asad, Aminoor, Mohammed and Nasrat. The teachers were Mr. Abdulla and Ms Hartley.

The Shooting Star Chase is a local charity that operates within West London and Surrey. They help to care for babies, children and young people with life limiting conditions (there is a high chance of them not reaching their 19th birthday).

The Hospices are fully equipped with special equipment for people with life limiting conditions. We were told where the money goes and how the facilities work. For example they have a sensory room, hot swimming pool and also an art and music room to give the children the same experiences as any other child would but adapted to their conditions and liking.

We were greeted by Ellie, who works for Shooting Star Chase, she is the Education and Youth Group Fundraiser for the charity. She took us on a tour around the main office where we got to see various departments operating. We were introduced to some Shooting Star Chase employees, who were extremely welcoming and friendly. They talked about their roles and the amazing ways the charity help people. They also told us about what they do and why they do it. They said that they did it so that people who have life limiting conditions can have the same experiences that healthy people have. Which got us thinking of all the things we take for granted, like the ability to look at the sky or even playing in the park. “Everybody should be able to enjoy life” is what a worker from Shooting Star Chase said. This just proves how devoted these people are. We also learnt 76p of every £1 is given straight to the Hospices.

We were delighted to hear many people including celebrities support the charity. You may have heard that the X Factor 2014 semi-finalists visited the children at their Hospice.

Before leaving they showed us a very interesting logo called the ‘Friendlies’ which is a thumb print that represents the uniqueness of everyone’s different needs. Each print has a face and nose on it to give it a character. It was great to be able to create our own friendly character on their display wall.

“I think this organization is inspirational to everyone. Shooting Star Chase would have been nowhere without the support of the local people so donate now!” Aminoor 8 Purple

“It was an amazing experience which taught us a lot about what Shooting Star Chase is about.” Shraddah 8 Green

Click here to find out more about Shooting Star Chase