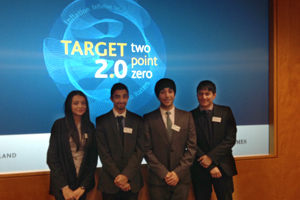 On the 21st November Heston’s very own Monetary Policy Committee made their way into Central London to give their opinion on what changes should be made to the interest rate, if any at all.  The competition they were part of was the Target Two Point Zero Interest Rate Challenge which is organised by The Bank of England and The Times.

The committee was made up of our top performing Economists: Sixth Form students, Syedur Rahman, Parus Kargathra, Jagdeep Bhandal, and Tejal Patel (pictured above). They had spent several weeks prior to the presentation, researching the state of the economy to form the basis of their decision.  Their research suggested that rates should remain unchanged at 0.5%.  Good news for all borrowers out there! Judges were impressed with their understanding of the economy.  They in particular liked that the group focused in on the fact that real wages had not risen and this was an important deciding factor.  Unfortunately, Heston’s MPC was just narrowly beaten by the MPC of Wilson School, never the less, Heston’s top economists made the school proud and learnt a lot more about the economy as part of the project.