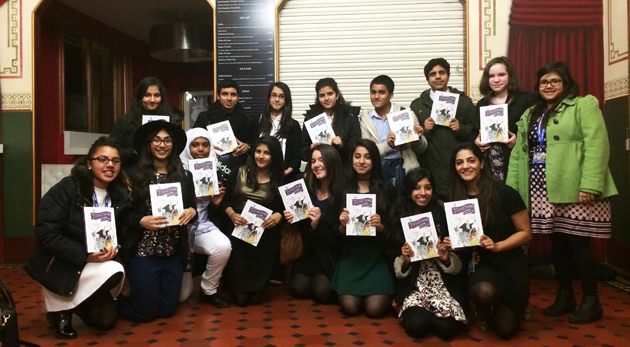 On Friday 14th November 2014, 16 students from Years 8-11 were invited to the Royal Albert Hall in South Kensington accompanied by Miss Dua and Miss Wallace to attend the exclusive book launch of Russell Brand's Trickster Tales: The Pied Piper of Hamelin.

Nadia Awad recalls: “When we went there, we were all in awe at the size of the Royal Albert Hall. It sat over 5,000 people, and the view of all the seats and the stage from where we were sitting was magnificent. A lovely surprise was that on each of our seats were signed copies of the book, a fantastic souvenir of the night. 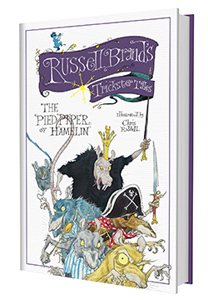 Celebrity, comedian, actor, activist and now author, Russell Brand put on a magical performance whilst reading aloud his adaptation of the classical tale The Pied Piper of Hamelin. On stage his words were accompanied by an orchestra, strobe lighting and a beautiful backdrop as a set; but the most striking of views was the hand of Chris Riddell, projected upon a large screen, creating live illustrations of the narrative. His work showed great detail, speed and talent and really bought the story to life.

Elvira, Year 10 said: “Russell Brand was very good at telling the story, he was very dramatic and put on various different accents for his quirky characters. The moral of his story was that one should always stay true to their word and honour their promises.

Brand allowed time for a Question and Answer session interacting with his audience. In his rather charming fashion, despite his strict self-censorship, he broke every rule in the book (no pun intended) whilst talking to the children- something that was actually welcomed by all. At the end of the show, Russell gave out the illustrations drawn by Chris Riddell and spoke to members of the audience, who were very enthusiastic to meet him.

“Overall, I enjoyed the show a lot, as it was amazing and a once-in-a-lifetime experience to see someone I've always admired live on stage. The book is really good, and my favourite quotes from the book are, ''What matters are invisible things like truth, love and honour'' and ''the important prizes can't be won by individuals, only by us all'', as they teach us that being selfish gets you nowhere, and you have to care about people around you in order to succeed in life."