Rugby World Cup 2003 winner and England 2015 ambassador, Lawrence Dallaglio, together with 14 Heston students helped to create the longest rugby pass, as part of  an event marking the one year countdown to the start of the Rugby World Cup. 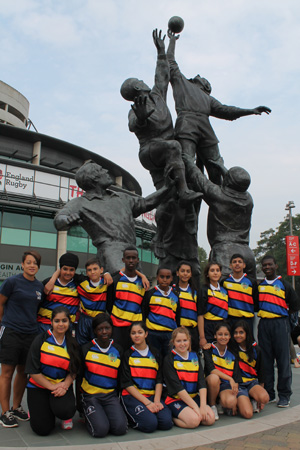 Year 7, 8 and 9, students who play rugby at Heston together with ex-England captain Lawrence and other schools passed a rugby ball from Redlees Park in Isleworth to Twickenham Stadium, ending at the Line-Out statue outside the stadium.

Mr Dallaglio said he was impressed by the skills on display that saw the ball passed 1,400 times over a distance of more than one mile: "They did a fantastic job and no one dropped the ball, which is more than can be said for a few professionals"

The event was also promoting rugby in Hounslow with the aim to get more young people playing the sport ahead of the tournament, which will run next year. Heston Community School is actively involved in the RFU’s Schools’ Programme and both boys’ and girls’ teams will compete throughout the season.

Miss Hollie Blenman, PE Teacher and Girls’ Rugby Coach, said: “The students stepped up to this challenge and I was very proud of them. They are all now keen to start playing again and take on other schools ... I’m sure our rugby season will go really well.”

The students thoroughly enjoyed their record-breaking achievement ... here are some of their comments:

“It was a roller-coaster of excitement” – Hollie Year 9

“We really stood out in our great kit!” – Gurjeevan Year 7 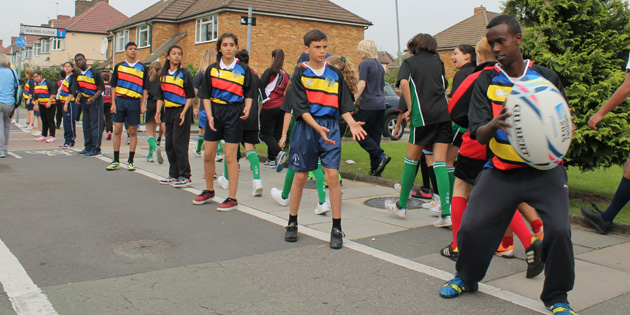