Congratulations to the winners of the Foreign Language Spelling Bee

On Tuesday 25th February, Year 7 students took part in the School Final of the Foreign Language Spelling Bee. The Foreign Language Spelling Bee is a national competition for students in Year 7 to practise and improve their vocabulary, spelling and memory skills in a foreign language (French, German or Spanish). Each student has one minute to correctly translate and spell out as many words as possible in the language that they are studying. 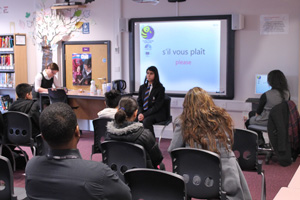 Miss Prior, Assistant Curriculum Leader for MFL opened the event saying that “At a time when Britain’s foreign language skills are forever being criticised, it’s great to see such a positive force of young linguists coming through at Heston, keen to take on the challenge and reap the rewards of learning a new language.”

Since beating their classmates in December, seven students have learnt an additional fifty words for the second stage of the competition, and went up against each other to secure a place in the regional final and the opportunity to compete against students from schools across London. 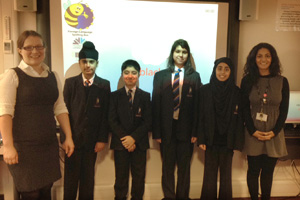 All the students had worked hard and should be proud of their achievement, although some struggled under the pressure of having school staff and parents in the audience. Our winners, Mohammed 7B, Bushra, Karina and Arveen 7G (pictured left), will now get another fifty words to learn before progressing to the Regional Competition towards the end of this term.