A number of Year 9 students took part in a Holocaust Memorial Day - Daya Ghatora from 9 Blue has written the following report on the day. 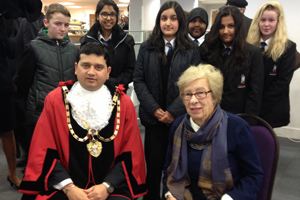 Prejudice - a preconceived opinion that is not based on reason or actual experience.

On Wednesday 29th January a few members of Year 9 went to the Civic Centre to hear a first-hand account of the Holocaust. The purpose of this event was to raise awareness about the Holocaust and make young people aware of the effect of prejudice on groups of people.

Upon arrival, a Priest said a prayer and introduced Eva Schloss , the step-sister of Anne Frank. She spoke to us about her experiences in the Holocaust and the tragedies she faced as a young Jewish woman during the Second World War. Her dad and brother were sent to a concentration camp and she never saw them again. 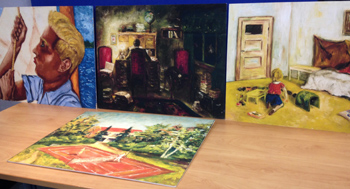 After she spoke to us, she showed us some paintings (pictured left) her brother did whilst they were in hiding to pass the time. Some of them portrayed what he wished for, and some portrayed what he could see at the time of painting such as the dark interior of cellars and basements, emphasising the restriction on their everyday lives and the overwhelming feeling of being enclosed.

After this, Eva Schloss, the Mayor, and the Priest invited us outside to lay flowers in the memory of all the Holocaust victims, whilst students from Gunnersbury sang a hymn. To conclude the day, the Priest said one last prayer that made us thankful for the life we all live and put into perspective how lucky we are and not to take even the most basic things for granted.